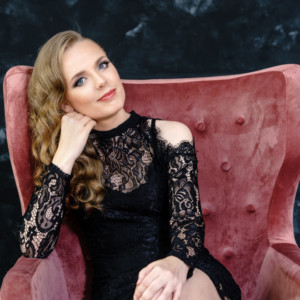 Merit, stage name Merit K. is Born on 27 September 1991 in Estonia and currently is living in Tallinn. Her childhood wasn't a typical one. She comes from a hard-knock life. But she always had talent and dreamed to do something in the music industry.

Her journey began early when She started kindergarten and her Music teacher noticed that She can hold a note. From then on Merit lives and breathes music and Her teacher became her Mentor in music and like a mother in life. There Merit also started to learn Classical Estonian dancing, but that was short-lived because Merit was innovative and she started to like HipHop and Street dancing. After a while in 3rd class Merit was curious about how she could play the Piano. She started to learn it with the help of her Music teacher, even though Her parents didn't know about it.Naturally, all this singing, dancing, and piano playing lead her to write song Lyrics at the age of 7.

That shows how determined she was from a very early age to be in the music industry. But She wasn't alone. Her music teacher-supported Merit on that journey like a Mother would encourage her children to reach for the stars. In the 6th grade, Merit switched schools and she found herself with new goals to accomplish in the Music world. With a new Music teacher, who was just as supportive as the previous one, Merit thrived and learned a lot. She got better at playing the piano and her Lyrics got better as well.
Additionally, Merit was trained in Opera and Pop singing by her teacher who wanted to see Merit reach her dreams. Later Merit continued to improve her skills and learned a little guitar just for fun. The DJ path started for Merit when she was 14, the moment she fell in love with hardstyle music. After She got 19, She went to a DJ school to study this style, and at the age of 24 started doing DJ-Set’s. Initially, She did them only for practice, but a few years later published Her first real DJ-Set.

She played in bars of Tallinn's Old Town for the first time and moved on to lounge bars and finally clubs. In 2020, She also started making songs as an artist, which helped Her get even more into the world of music. Since the beginning of 2021 She's doing DJ-Set’s for radios around the world, and has joined Seua Digitaly Records as Her first niche Label. As a producer She's loyal to euphoric hardstyle and raw hardstyle music. Sometimes She does DJ-Set's in other harder styles. The future is not set, and Merit will improve herself in everything she dreams of accomplishing. And hopefully, you as a fan will grow with her.

Warning: There are no items to display this module.